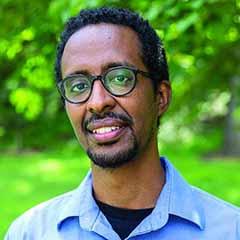 Title
Convocation 2020 - Deriba Olana
Date
Author/Photographer
Deriba Olana
Decade
2020s
Notes
St. Andrew's School math teacher Deriba Olana delivered the 2020 Convocation to kick off the new school year. As this took place in the midst of the Covid-19 pandemic, this convocation was held virtually via Zoom.
Deriba begins his message by telling us a little bit about growing up in Ethiopia and meeting children with leprosy. Fast forward to his young adult years where he meets Roland and Birgitta Kazen, a couple from Sweden (who later became his good friends). They worked at a leprosy hospital in Addis Ababa and Roland was the organist and choir conductor at Deriba's church. Deriba became their translator. Birgitta worked as an International Training Coordinator and Roland, a reconstructive surgeon specializing in patients with leprosy. "To me, the Kazens are enduringly inspiring."
Deriba goes on to speak about Roland's work, "...it is his noble spirit that towers above the geniuses pushing the frontiers of medical research at Hopkins or Harvard. With the passing of time, his legacy means more to me. It is by looking at his and Birgitta’s lives that I began to understand the fear and involuntary aversion I felt when the leprous children ran to me." Deriba talks about Jesus touching and healing lepers and how this inspired the work of the Kazens.
"The Kazens had a reconstructive view of leprosy. Roland operated on lepers because he believed their bodies were as sacred as his own, and worthy of his highest intellectual and physical exertion. Birgitta was determined to see recovered patients restored to full dignity, because lepers are deserving children of God. The advantages the Kazens got from a European education and privilege were totally spent in the unselfish service of those less fortunate--because they believed such misfortune was an injustice to themselves. This is an echo of God’s miraculous grief."
View Full PDF Document
Copyright Information
Back to Results