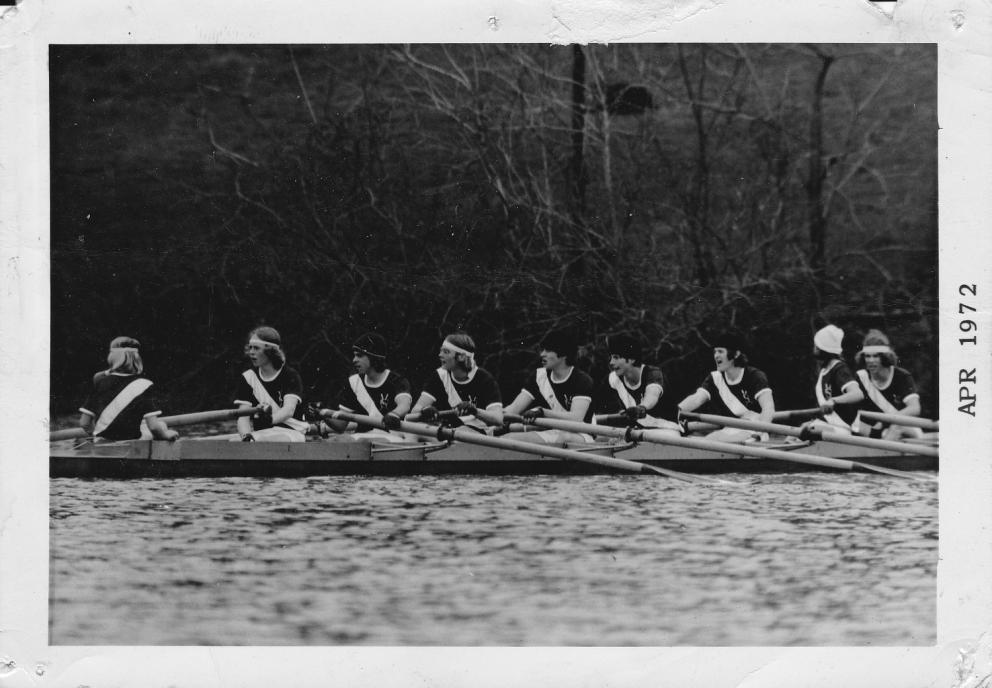 Title
2nd Boat Crew Story
Date
Author/Photographer
Marshall Barroll '74
Decade
1970s
Notes
This photo along with the following story from Marshall Barroll '74, reveals an exciting day on Noxontown Pond.
"This pic was taken by my roommate, Edwin L Sibert,III, at the end of the race in April 1972 from a school launch. This was the 2nd boat and it was moments after a mile long race vs Atlantic City H.S. My recollection is that we won by over 5 lengths and we were just waiting on them to cross the finish line. It was my first race at starboard, (since we had a previous crew member injury, and I made the mistake of telling Ducky I was ambidextrous.) I caught a crab,(not the blue kind I like to steam,) nearly stopped the boat, with associated blood stains all over my white racing stripe, but we were still able to recover and put them away!"
"The oar hit me in the nose, (breaking it,) and the mouth, and it tried to pull me outta the boat. Eisenbrey, Dunn, and several others told me to stop bleeding so much as it was going back and forth with each stroke, turning the water red in the bottom of the shell- they said it was nasty to look at!! I almost broke the oar, breaking the clamp rigging in the process, just to avoid the embarrassment of being yanked out of the shell at 15 knots. I think this happened to Silver just a week earlier. Nothing funnier than seeing a crew shell cross the finish line with a missing oarsman:) (Yes, oarsman is the correct word:)
Our practice shirts were just plain red, and luckily the mainly red racing shirt that day covered up most of the blood, as my parents were up from the eastern shore to watch the race. My brother Stew was down at the dock about to stroke the 1st boat in the next race, took one look at me, and said, "Heyyy, Mashed Potatoes, looks like you just came off the football field!" It was a memorable day."
Appearing in this photo, left to right: cox: Ralph Neel '75, stroke: Jack Schreppler '74, 7: Henry Hauptfuhrer '74, 6: Robert Dunn '74, 5: Marshall Barroll '74, 4: John Eisenbrey '74, 3: Silver '75, 2: Douglas Andresen '73, bow: Menefee '73.
View Full Size
Copyright Information
Back to Results